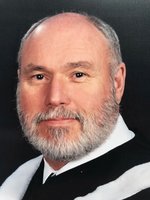 It is with profound sadness that we announce the passing of Alfred on January 8th, 2020. Al is survived by his daughter Kristen, son Michael, grand-daughter Talitha, grandsons Reilly and Hudson, mother Florence, brother James, nephew Colin and niece Jessica. Al is predeceased by his father Alfred and son Alfred. Alfred was born in Chatham, Ontario on December 27, 1948. He graduated from Grant Park High School in Winnipeg and obtained a Bachelor of Fine Arts degree at the University of Manitoba, specializing in graphic design and photography. He also held a Certificate in Management from the University of Winnipeg. He began his career in publishing in 1980, becoming the co-founder and publisher of the Winnipeg Sun until 1991. During that span he also served as Vice President of the Winnipeg Chamber of Commerce; and as President of the Zoological Society of Manitoba, bringing pandas to The Winnipeg Zoo from China for the very first time in 1989. Away from the office Al was a loving father and a passionate sailor, harboured at Northern Harbour on Lake of the Woods. When Al wasn’t attending the kids’ hockey games, horse riding lessons or mountain bike races he was out exploring the lake with his family. The family would like to invite you to join them in a Celebration of Al’s life from 3:00pm to 6:00pm on January 25th at 1114 Rue des Trappistes (Winnipeg).