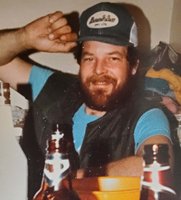 It is with great sadness that we announce that peacefully and with his family by his side, Larry passed away at the age of 65 years at the Health Sciences Centre on January 12, 2020. Left to cherish Larry’s memory is his beloved wife of 45 years Carol. Larry will also be lovingly remembered by his son Cory (Danielle); daughters Tammy Blask (Jason) and Crystal Cardinal (Dwayne), grandchildren Eston, Rylee, Tevan, Casidhe, Alannah, Alexis, Jakeb and Seth; and great-granddaughter Sophia. Also mourning Larry’s passing is his brother Walter; sisters Linda Pastetnik, Debbie Urbanik and Karen Krawchuk; his sidekick Orest; Baba Glowach and a large extended family and numerous friends. Larry was predeceased in life by his parents Anne and George; and father-in-law Peter Glowach. Larry was born on March 7, 1954 in Winnipeg, Manitoba. Dad loved going to Arborg. He loved visiting family and friends and drove like he was in The Dukes of Hazard. He loved cars, Labatt’s Blue and our mom. Dad was always mischievous and funny. He was a friend to everyone, Cory’s friends (Marty, Kiely, Bret, Steve, Keith and G) called him “Papa C’, some called him, “Big Lar” and to his nephew he was “Larchu”. Dad was always protective of his family. Dad did most of his high school at the Lincoln Motor Inn. He graduated with honors. Dad was a courier driver and always enjoyed meeting new people. On October 26, 1974, dad married the love of his life, Carol. Dad enjoyed Karaoke, watching football and hockey. He loved the Toronto Maple Leafs and could always be heard saying, “next year” when they missed the playoffs. He enjoyed coaching his son in hockey, and later, spending time with his grandchildren, trips with mom and “freebie weekend”. Gigi had a special bond with all of his grandchildren, especially with his grandson Jake. He was Jake’s “Buddy” and they were inseparable. We know that dad is up there playing King Pedro with his father-in-law Peter, having a much needed drink with his dad, getting told to get a haircut and catching up with his mom and looking out for Christopher. He’s also practicing Fuzzy Duck because the boys beat him once and he’s been waiting for his rematch. Dad always treated his son-in-laws more like they were good friends and his daughter-in-law wasn’t just his son’s wife, he considered her a daughter as well. We miss him already. We extend special thanks to Kim and Orbey Magnusson, Karen Krawchuk and Linda Pastetnik for the love and care you showed dad and us every day. We are also grateful to the staff at HSC RR6, CancerCare Manitoba and Dr. Dubey who never gave up on dad. At dad’s request, cremation has taken place and no formal service will be held.