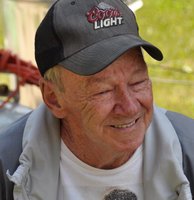 Unexpectedly, but peacefully as the result of a stroke, Ron passed away on January 16, 2020 at the Health Sciences Centre at the age of 77. He was predeceased by his beloved Shirley; his parents Peter and Caroline; and his brother Rick. He is survived by Shirley’s daughter Cheryl Furkalo (Larry) and their children, Logan and Fallon; sister Connie; and brother Dean. He was born in Winnipeg on March 25, 1942 and grew up in Elmwood attending Sir Sam Steele, George V, David Thompson and Tech Voc schools. In his youth he was active as a member of the Manitoba Motorcycle Club and won several trophies for his hill climbing abilities. He shared his love of motorcycles with his brother Rick. He was an avid camper and fisherman and truly enjoyed the outdoors. Cheryl remembers happy family times at Betula lake. Les and Marina shared good memories of camping at Waiparous in Alberta. Locally, he enjoyed spending time at St. Malo, La Barriere Park and Lockport to name only a few of his favourite places to camp and fish. He, Shirley and Cheryl moved to Camp Morton and ran the local store and post office in the seventies. After that, Ron and Shirley moved to Calgary joining good friends, Neil and Loretta and lived there for a few decades, returning “home” to Winnipeg to be with family. Cheryl’s twin children were a happy addition to the family and he enjoyed being their Grandpa. Ron was fun loving and always a joker and had many good friends. He will be missed. Thanks to the Winnipeg Fire and Paramedic Service, HSC Emergency Staff, High Observation Unit for their compassionate care. Many, many thanks to cousin Terry Matthes for his friendship and loyalty and for being there for Ron and seeing to his needs. Thanks also to Susan for all her assistance and to the family and friends who supported him. According to his wishes, cremation has taken place and there will be no formal service. Rest in well deserved peace, Ron.