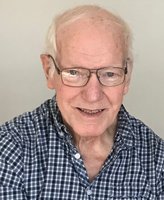 ALVIN PETER FRIESEN 1933-2020 Al passed away at the age of 86 at Parkview Place Care Centre, Winnipeg, on February 5, 2020. He was born in Steinbach, Manitoba, on May 10, 1933 to Rev. Peter D. and Margaret Friesen. A little more than a year later Alvin was joined by a little brother, Donald, and before long their parents could hardly keep up with the high-energy pair. Al delighted in telling the stories of their mischievous antics. At age 16, Al started work at Friesen Machine Shop in Steinbach, where he learned the craft of a machinist, boring pistons and grinding crankshafts. After a while he saved enough for a Buick Century hardtop, with which he drove to barn dances in the area—his specialty was the polka. He was a big man, but light on his feet. As a member of the Kinsmen Club in Steinbach, he contributed many hours of labour to the construction of the town’s first swimming pool. In 1960 he found work with Motor Parts and Supplies in Winnipeg, where he was a valued employee for 36 years. His last place of employment was Custom Crankshaft, and he worked there into his seventies, when the company went out of business. He took pride and pleasure in his work, and it was hard for him to retire. Al married and raised a family in Transcona. Subsequently he divorced and met Carol, with whom he made a home in Elmwood. For many summers they enjoyed their trailer home at Spruce Sands. In his last year he developed symptoms of dementia, which suddenly worsened, necessitating a move to a care home. Al was a past member of the Elmwood Royal Canadian Legion. He loved crosswords and spent many a happy hour fishing and hunting with his friends. He is survived by his faithful and loving wife Carol, son Darren, sister-in-law Donna (Bob), daughters Deb and Shawna (Rob), grandchildren Jerrod (Christine), Kaia, Erin and Jayde, great-grandchildren Walker, Memphis, Cameron and Luna, and siblings Donald (Anne), Mary Ann (Jake), Norman (Myrna) and Ralph (Hannah). He was predeceased by his parents and brother Vernon (Irma) and his first wife Connie. Special thanks to the wonderful, exceptional care-givers at Parkview Place, where Al spent the final months of his life. His gentle manner endeared him to staff and residents alike. A memorial service will be held at John Black United Church, 898 Henderson Highway, on Monday, February 10, at 11:00 a.m.