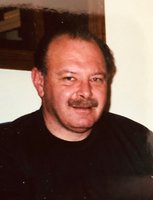 Robert Wayne Cave January 31st, 1953 - February 4 2020. He was 67 years young when he passed. It is with heavy hearts that we announce the passing of our beloved Robert (Bob) on Tuesday February 4, 2020 at Concordia hospital after a short battle with lung cancer. A small grave side service will be held at a later date. Bob was born in Winnipeg Manitoba on January 31, 1953. He had various careers throughout his life. He worked at the Eatons Power house, worked in the steel industry as a welder, worked in the transportation industry as a truck driver, and eventually retired from the Corps of Commissionaires due to health issues. Bob had battled throat cancer previously and had beat it. He wanted to give back and decided to help drive for Cancer Care Manitoba Foundation. Throughout his life he was always helping people in whatever capacity he could. In the summertime, he enjoyed having family and friends over for barbecue and swimming in the pool. He enjoyed spending as much time as he could with his grandkids. He especially loved baking cookies and seeing the smiles on their faces when they ate them. He loved when he could travel. He especially enjoyed driving to the states to visit his son and other grandchildren. He may not have been able to be with them all the time but he was video chatting with them all the time. When he was younger he played hockey and softball. He also bowled and enjoyed golfing. He liked watching sports and yelling at the TV with very colorful language when things were not going his way. Bob had a very unique sense of humor and to those that didn’t know him he would come off the wrong way but once you got to know him you understood what a funny, caring, loving man he was. Bob was loved by many and will be missed by his family and friends. We are sad that cancer took him from us far too soon. Bob will be remembered by his wife Joyce whom he married on October 5th 1974. His son Michael (43), son in laws Justin and Dwight, daughters Crystal (40) and Ashley (36). His 6 grandchildren Kaitlyn (22), Nicholas (22), Rory (12), Lily (8), Aiden (7), and Asher (5). He is survived by his mother Elsie Cave and his sister Nancy. In lieu of flowers Bob would have wanted a donation to be made in his honor to CancerCare Manitoba Foundation.