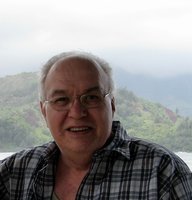 Jim passed peacefully on Monday morning after a long struggle with declining health. He is survived by his wife Shirley (née Zoroneck) and daughter Tracy (partner Beau), predeceased by his parents Stephen and Mary, and his brother Alex. Jim was known for his sense of humour and love of games, sports, and socializing with friends and family. After working many different jobs across several fields, he settled as an inside worker at Canada Post in the early 70’s, eventually working with his childhood friend, Bill Pal. He worked the night shift for years and would frequently go out for a game of curling or hockey in the mornings after his shift. An avid cyclist, he cycled downtown and back to work every day the weather allowed. He loved the family cats, and they adored him. He loved getting together with friends and family, and liked card games, swimming, and going to the lake. Jim’s extended family resided in the United States, and he is predeceased by many of them. Shirley’s family became his, and he will be missed by Julie, Diane, Melvin and Sharon, and his niece and nephew, Lori (daughter Jamie) and Keith (wife Leanne, sons Frazer and Stuart). His later years were spent in decline after a long and chronic illness, and he had lost the ability to do many of the things he had loved. Friends and family remember him as the person who was always ready for a gathering: a bar-be-que, a card game, a curling match, or having everyone over for a swim on a warm summer’s night. The family wishes to express gratitude and thanks to the staff and caregivers at Bethania nursing home who provided Jim with a comfortable and warm home in his last year. Many thanks to the staff at St. Boniface Hospital for attending to Jim with care and compassion. A memorial for Jim will take place in the early summer at the request of the family. Rest in Peace, Jim. You will be missed.