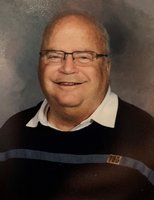 On Tuesday August 18,2020, Louis Joseph Norbert Carriere, loving husband, father and grandfather, passed away at the age of 70. Louis is survived by his wife Jeannine; daughter Suzanne (Tim); grandchildren Erin, Sam and Evan; sisters Leona (Roger), Anne Marie (Maurice); brothers Gerry (Rita), Donat (Louisa); and many nieces, nephews and extended family. He is predeceased by his brother Claude; and sisters Sr. Denise, and Jeanne (Isidore). He was born to parents Joseph and Exilda (Brisson) Carriere on Oct 10, 1949. He moved from the Otterburne/St. Pierre area to St. Boniface Winnipeg when he was 5 years old. He graduated from College Saint Joseph. In his career, Louis worked for Domo Gas, Metropolitan Life and in the real-estate industry. He also started his own businesses with Carlev Property Management and Sea Breeze Tanning Salon. He later settled into a long career with Sears as a salesperson, retiring in 2004. In the 1980’s, his career took him to Calgary where he spent three years with his family, proudly introducing them to the mountains and hiking. There were many great memories of hiking to the Tea Houses at the Plains of Six Glacier at Lake Louise. Louis was an animal lover and head dog trainer for CND Pet Supplies, German Shepherd Dog Club of Manitoba and Best Friends Animal Hospital. He won #1 obedience German Shepherd and #8 overall obedient dog across Canada in 1992. He also helped train and place abandoned dogs that were destined to be euthanized. He always had a house full of dogs and cats, and at one point, even fish and birds. He loved the outdoors and enjoyed hunting as a young man and fishing. He enjoyed gardening and many commented that his backyard resembled a park. In his hands, he could make anything grow. He was known in his neighbourhood of 35 years, as the man that cleared the streets of snow drifts and unblocked the iced drains. He and Jeannine explored Canada in their retirement years. They had adventures in Nova Scotia, New Brunswick, Prince Edward Island, Quebec, British Columbia, and Vancouver Island. Some of their highlights included driving the Cabot Trail, seeing the Hopewell Rocks, Anne of Green Gables, and the Butchart Gardens. In 2015, with determination, he explored the Pacific Rim National Park in Tofino, British Columbia with his entire family. When he reached the end of the trail, which led to the Pacific Ocean, he dipped his feet in the water and was cheered on by his grandchildren, wife, daughter and son in law. Throughout their 48 years of marriage, his wife Jeannine was always by his side sharing in the many adventures. Louis’ grandchildren Erin, Sam and Evan held a very special place in his heart. He would often drive them to school and loved to recount their daily adventures, especially on “Tim Horton Tuesdays “. He will be forever remembered for his sense of humour, easy laugh, and as the “Grandpa that said bad words when driving”. Special thanks to the staff at Actionmarguareite St. Vital for their compassionate care and support. In accordance with Louis’ wishes, cremation has taken place and a private church ceremony will follow at a later date. Flowers are gratefully declined. In Louis’ spirit, celebrate life and embrace it with kindness.