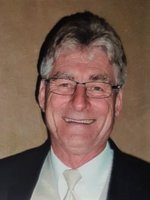 Peacefully with his family by his side, Bill passed away at the Riverview Health Centre on March 23, 2021 at the age of 69 years. Left to cherish Bill’s memory is his beloved wife of 48 years Leslie; sons Jamie (Sharmaine); Jeffrey (Valerie) and Christopher (April); grandchildren Kailyn, Leigha, Teigan, Cobin, Hayden, Ryder and Myah; and brothers Joe (Debbie), Mike (Cindy) and Don (Melinda). Bill was predeceased by his parents Rose and Roman, and brother Robbie. Bill entered this world on Apr 26, 1951 to the joy of Roman and Rose Bihun. Bill and his brothers, Joe, Mike, Robbie and Donnie, kept their parents busy with their escapades such as standing on their wagon to pull the fire alarm on the street and watch the fire engine rush by. Then there was the day Rose came home from work to find all her sheets and towels used as a perimeter for a lake consisting of 6 doz. cracked eggs in the middle of her kitchen floor. As a teenager he always enjoyed spending time in Matlock, Winnipeg Beach and the Whiteshell with his brothers and buddies. They had some great times, hiking, swimming, canoeing, drinking (sometimes on top of Waseys cottage with their lawn chairs). Bill first met Leslie outside of Grant Park School and he knew immediately she was the one for him. They both loved to dance! And that is what they did most weekends. They were the first on the floor and last to leave; a practise that followed them through most of their married life. They married in 1973 and went camping to Banff and Jasper for their honeymoon. In the first year, they purchased their first home and made it their own with much renovations and good times shared with friends and family. Jamie was born in 1978, Jeff in 1981 and Chris in 1984. Bill could be heard on the arrival of each child saying “I CANT BELIEVE I AM A FATHER!!” With the birth of their sons, he gave up smoking and drinking, as he wanted to be a good role model for his young family. They spent much time biking, swimming at the beach, camping and spending many Sunday dinners with his parents and extended family; and weekends with the in-laws and their family at Wanasing Beach. The boys grew and activities ranged from hockey, soccer and baseball and of course camping. Bill was kept busy attending all the functions, transporting his sons and their friends from place to place. The boys became teenagers and Bill’s love of music began to transcend down to his sons. They each played a different instrument. He always encouraged them and to others by lending their basement out to numerous musicians in the making. Birthdays and holidays were always a time for lots of family, friends, good food, lots of fun and reminiscing over the good times. His family was always his most valuable treasure and he was always lending a helping hand for many a project. Once the boys left home, Bill became more engaged with golf. He loved playing, watching tournaments and actually achieved a hole in one at Falcon Lake. He was ecstatic when they became grandparents; loved to babysit and attend all the grandchildren's activities. Bill was a devoted husband, father, grandfather and friend to all. He leaves us with many good memories and a value “that wealth does not come from money and material things; rather from loving, helping and enjoying the people that surround you!” He was so grateful for all the support he received from everyone during his battle with Cancer. He will be forever grateful! In accordance with his wishes, cremation has taken place and a Celebration of Life will take place at a later date. Celebration of Life details will be posted on this website later, as Covid allows. In lieu of flowers, please consider a donation to Palliative Manitoba.