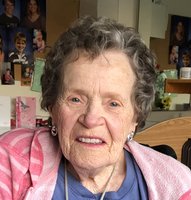 After a brief illness, with family by her side, our dear Mum, Patricia Viola Ward (nee Chaloner) passed away on March 27, 2021. Patricia (or Teash as she was lovingly known to family) was born on August 7, 1929 to Jessie and George Chaloner, in West Kildonan where she grew up with her four sisters. She married our Dad Richard in 1949 and then four children came along. In 1981, they ventured outside of West Kildonan to Niakwa Park where they resided until Dad’s passing in 2015. Mum was known for her exquisite baking and pastry and was lovingly referred to as “the hostess with the mostess” for her all out efforts. Her great loves were her grandchildren and great grandchildren. She adored them as grandmas do, always with a treat or small gift on hand, so proud of their accomplishments. Mum was a dear aunt to many nieces and nephews. Sandy, thank you for your visits and thoughtfulness. Survived by Glenn, Larry, Patricia (Barry); six grandchildren; and seven great grandchildren. Mum was predeceased by husband Richard; daughter Kim; and grandson Tyler. Mum resided at ActionMarguerite PCH Saint Boniface for the last few years and we are so deeply grateful to the extraordinary 3rd floor staff who cared for and befriended Mum and were so kind to us during Mum’s last days. As Mum would say “BLESS YOUR HEARTS”