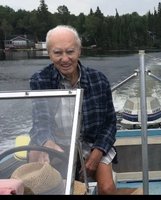 It is with heavy hearts that we share the passing of our beloved dad and grandpa (Ralph) Irwin Hayes, on April 25, 2021 at the age of 94. Irwin was born in Moose Jaw, Saskatchewan on January 27, 1927. Irwin was predeceased by the love of his life, Catherine Ileen Hayes (nee: Pruden); and his grandson James Robert Hayes. Irwin leaves behind his children Sharon (Glen), Tim (Dianna), Kim (Ward), Kevin (Carmen); many grandchildren, great grandchildren and great-great grandchildren. He will be dearly missed by all of us. Irwin always knew how he wanted things done. He did things his way right up until the end as he passed quickly and quietly in his home. Irwin loved the lake, cruising the waterways on his boat with his family and friends in tow. Irwin bought his brand new Starcraft boat on Father’s Day in 1973 and he meticulously cared for his prized possession. He drove that boat for hours every summer making sure all his kids/grand kids and great grand kids got a turn tubing, water skiing and wakeboarding. Then it was his turn. Irwin was an avid water skier and loved to slalom ski every opportunity he could. He continued to water ski well into his late 70's. Irwin continued to take his 1973 Starcraft boat for an occasional 'spin' going out on his own cruising the Lee River right up to last summer at the age of 93. Bonnie and her family were able to take her Grandpa camping to his favorite place Falcon Lake last summer, where he smiled ear to ear as he once again drove the boat pulling the grandkids around on the tube. Irwin was a hard worker and had to begin to be responsible for himself from a young age. Irwin worked a variety of jobs during his lifetime including farming, battery maker, airline electrician and finally retiring 32 years ago from the Seven Oaks School Division. Irwin was married to “his princess” Ileen for 50 years. He loved and adored her so very much. Mom and Dad spent many hours camping, boating, fishing but their favorite was dancing. Mom and Dad were members of the West Kildonan Legion where they spent time with their friends and they would dance the night away. Dad’s love of dance was witnessed by all who attended his 90th birthday, as he danced all night to the old time band which played his favorite music. They also enjoyed being able to travel to their favorite destination, The Barbados, approximately 20 times. They were very social and their greatest joy was spending time with their family and friends. Dad also enjoyed the outdoors as he would walk the Kildonan Park paths daily, regardless of the season to feed his birds. He took great joy feeding the ducks, geese and chick-a-dees (some would land on his hand and his hat). While at the cabins, Dad could watch the hummingbirds for hours. Dad also loved downhill skiing in the winter. He was so happy to have skied Banff and Lake Louise during his trips to Calgary to visit Marilyn and Nick. He was 80 when he retired from downhill skiing. Irwin may have been on the quiet side, but you always knew how he felt about you. We all knew how much he loved Grandma and we are happy they are reunited now.