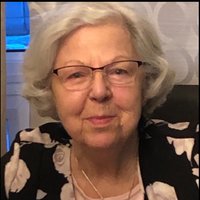 With sadness, we share the peaceful passing of Ollie Beque after a brief but courageous battle with cancer. Ollie is survived by daughters Debbie (Ron), Marla (Art); and son Jeff (Arlene); three grandchildren Josh (Jenny), Ciara and Chris (Carly); and two great grandchildren Oliver and Louis. Also left to cherish her memory are brothers Joe (Carol) and Maurice (Elsie); sisters Pauline and Phyllis; as well as many nieces and nephews. Ollie was predeceased by her husband Norm; brothers Peter and Paul; sisters Mary, Elsie and Anna. Mom was born in Cudworth, Saskatchewan and then as a teenager moved to the big city of Winnipeg. Her first job was at a record store downtown. This was her dream job as Mom loved to listen to music. At home, the volume on the radio was always at full blast. Her next stop was Eaton’s mailroom, which she made many life-long friends. One of Mom’s last jobs was with MTS. She was the person who came into your home to place the sticker when phone jacks were all the rage. But, Mom’s true passion and love, was love of family, her children and grandchildren always came first. There was nothing she would not have done for any of us! She was simply the best! Mom had a favourite saying that was posted in her kitchen for many years: “Don’t Let Anyone Dull Your shine!” Mom, no one shone brighter than you!