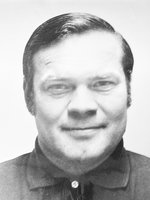 Ed was born in 1936 in Gilbert Plains, Manitoba. His mom, dad and four siblings had immigrated to Canada in 1930 and settled in the area. They grew vegetables in the summer and cut wood in the winter. It was a hard existence, especially with 5 small children. They moved to Winnipeg in 1937 when Ed was less than a year old. Ed was one of seven boys and two girls born to Anton and Paulina. Anton died in 1965 and Paulina lived to be 100 years old, passing in 2003. Ed is survived by his sister Victoria. He is also survived by his son James; daughter-in-law Shelley; and his grandkids Nic (Vanessa), AJ, Ava and Natasha. Ed met and married Judy (Hales) in 1965. Their son James was born in 1966 followed by daughter Lori in 1968. They raised their family in Fort Garry and Ed worked at Eatons and Pioneer Electric. Summers were spent at the cabin in Kenora. Ed and Judy built the cabin and he spent as much time there as possible – on the lake, fishing, and having a beer. Some of his favorite memories took place around the campfire at the lake, though we are not sure he could actually remember them all! Judging by the pictures, Ed took off his shirt at the Manitoba-Ontario border and spent every summer shirtless with a great tan! Losing Lori was devastating for Ed and he once said the only way a person could carry on after the loss of a child was “because you have no choice when you have another child and a wife to take care of”. Ed was “Pops” to James and they were close, living together after Ed and Judy divorced and while James went to University. Ed took great pride in the house he built on Rosemount and, later, his home and yard on Tait Avenue. He grew the most beautiful canna lilies and had a garden full of onions, peppers and tomatoes. Ed loved to be outside, often walking three miles a day through Kildonan Park. When James married Shelley, Ed became an instant Papa to Nic. I don’t think he knew quite what to do with this active kid that never sat still but Papa was happy to come out and watch football and hockey games. He was so happy with the births of AJ, Ava and Natasha and would often come for visits with the kids, bringing his toolbox so he could “fix a few things” before we had the lunch he would bring over. He loved being a Papa and later became “Yoda” because the kids said he was about 900 years old, just like Yoda. Once he moved to Charleswood, he was content to sit outside his assisted living facility, working on his tan and visiting with his neighbours. He enjoyed his time at Assiniboine Links far more than he expected he would and as a family we enjoyed the annual BBQ and the Sunday suppers in the dining room. He often complained that he needed a bigger belt on account of Chef James’ great cooking and ice cream for dessert. Ed lived life on his terms, continuing to drive back to the North end for his hair cuts and to go the bank (always the teller, never a machine!) for as long as possible. He loved seeing his grandkids, watching hockey and football with James - always cheering for the Tom Brady and the Patriots. He proudly wore his Riders or Bombers jersey when Nic was playing and was so proud when the Bombers won the Grey Cup. Ed spent his last few weeks at the Grace Hospital and we are so thankful that we could spend time with him before he passed. He was strong until the very end and his passing was peaceful. We will have a private family service at some point in the future. If you would like to join us in honoring Ed, please say or do something nice for someone else today. Stop and enjoy the feel of the sun on your face or the taste of a cold beer or a stiff scotch. We love you Yoda and will miss you very much.