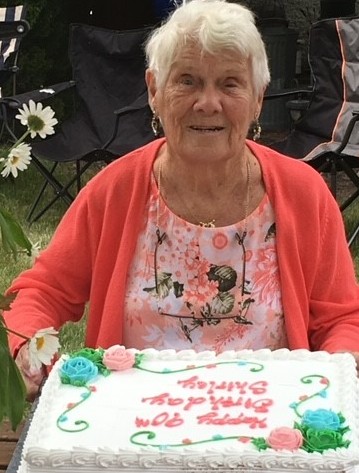 After a long battle with dementia, Shirley passed away peacefully at Golden West Lodge on June 9, 2021 with family by her side. Shirley is survived and will be greatly missed by her husband Mel; children Lauren (Colin), Janice (Jon), and Drew (Susan); grandchildren Sydney, Reegan, Brandin and Robin; nieces and nephews; and many friends. Shirley was predeceased by her parents James and Sophia Cox and siblings Reg, Marj, Audrey, Eleanor and Dorothy. Shirley grew up on Eugenie Street in Norwood and graduated from Norwood Collegiate. She attended business college after graduation and worked in various companies as a secretary. She met Mel at a house party and they began dating. They married on August 6th, 1954. After starting a family, Mel and Shirley bought a new home in Windsor Park and Shirley stayed home to take care of her family. They enjoyed their summer vacations renting a cabin at Grand Beach or travelling West to visit relatives. Shirley was an exceptional cook and baker. She was such a kind-hearted soul who loved people and especially babies. Shirley liked to curl and golf but was happiest when she was together with her family. After retiring, Shirley and Mel spent the winters in Largo, Florida where they loved to walk the beach, swim, play tennis and shuffleboard. They met many wonderful friends there. Shirley moved into a care home in July 2020 as her dementia had advanced. Mel and family took care of Shirley at home for many years prior to her move. We would like to thank the staff at Golden West Lodge for the loving care Mom and our family received in the last year. We would also like to thank neighbours Anne and Armand for all their support. If desired, donations can be made in Shirley’s memory to The Salvation Army - Golden West Centennial Lodge - 811 School Road, Winnipeg Mb. R2Y 0S8. A private family interment will be held at a later date.