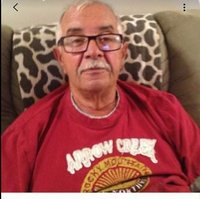 It is with great sadness that we announce the passing of Reginald Glynn Crawford on Tuesday July 27th at the Gimli Hospital at the age of 73. Reg is survived by his daughter Dawn Cross (Richard), Manitoba; son Michael Crawford, British Columbia; grand daughter Grace Cross; Sister Anne Marie Sellers, Manitoba; brothers Cliff Crawford (Jennifer), Ontario, Greg Crawford (Jean), British Columbia, Peter Crawford (Victoria), British Columbia; and Ted Crawford (Michelle), Manitoba; and partner Myra Cross, Manitoba. Reg was born on October 12, 1947 to Mavis and Cliff Crawford. He grew up in the St. James area of Winnipeg, Manitoba. He was very close to his brothers and they could always be found together. Reg went to work up North on the drill rigs to help support his family in his late teens. He had an exceptional work ethic that turned into a life long passion for operating heavy machinery. In his spare time, he loved watching Nascar, riding his motorcycle, working on his new house out on the farm and spending winters in Mexico. Reg will be dearly missed by his countless friends and co-worker. He knew someone everywhere he went. Reg was known as a social guy and loved visiting with his friends and family. Our sincere thanks to all the staff at Gimli Johnson Memorial Hospital for all your care and compassion. In lieu of flowers a donation in Reg’s memory can be made to Cancer Care Manitoba. Cremation has taken place and a celebration of Reg’s life will be held at a later date.