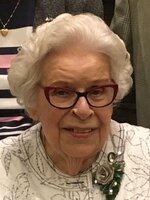 The family wishes to announce the passing of our aunt, Evelyn June McDonald, 98, on August 31, 2021. June was born March 8, 1923 in Medicine Hat, Alberta to Edmond Salter Cole and Mary Emily (Hall) Cole. June had two brothers, Jack and Fred. As June’s father was in the petroleum industry, the family moved to various locations in Alberta and Saskatchewan. Her parents eventually settled in Winnipeg and built their home on Kildonan Drive. As a high school graduate, June got on a train from Saskatoon to Ottawa, to help the war effort. And she did, working with senior officers in National Defence. On a visit back to family in Saskatoon, she was persuaded to stay there to help her mother. June found work again with the federal government. When her parents and she moved to Winnipeg, June was able to join a newly created branch of Veterans Affairs, assisting families of returned or lost veterans. It was here she met and married Edward McDonald. Through the years she worked in various departments and agencies, retiring from the Canadian Wheat Board. Uncle Ed and Aunt June had their only child, Allan Ross in 1948. They bought their first house in West Kildonan. When the Cole seniors decided to sell, the young McDonald family bought the family home in East Kildonan. They spend many happy years on the banks of the Red River. Ross was born with Downs Syndrome and at eight years old moved to the school at Portage La Prairie. The family would visit Ross regularly, bringing him home for holidays and other occasions throughout the years. For several years, Ed and June and his brother Bill and his family would rent a cottage at Grand Beach. Ross, Susan and Andrea spent many weeks on the beach. Those were very happy times. In later years after Uncle Ed passed, June received help and regular visits from their niece Marte and husband Boris. Leslie and her husband Carl would drive to Portage for their regular visits. Ross moved to St. Amant making visits easier. June was active throughout her life as a mother, working full time, curling, bowling and golfing. In later years she joined the “Y” for the ‘aqua fit’ program. She really enjoyed the company of the women she met there. June attended many of the monthly lunches, even after she moved to St. James. June had a very full life. She enjoyed her family and the travel that she and Ed were able to take; winters in Texas to golf, and a trip to Europe. In her 60’s, she travelled with a golf group to Australia and New Zealand. This was a real highlight. Recent years were closer to home, and she celebrated occasions with family and friends and then at her apartment for her birthday parties. Ed died in 1989, and Ross sadly passed away in 2011. June remained in the house on Kildonan Drive until she was 92. After a fall in 2014, she moved to Sturgeon Creek Assisted Living Residence. This was close to her two nieces Andrea and Susan. A fall in the spring of this year meant a hospital stay and care, and finally to Golden West Centennial Lodge. June always appreciated the cards, letters and phone calls from her relatives. June leaves behind nieces and nephews in Ontario, Manitoba, Saskatchewan and British Columbia. June lived longer than all of her family, much to her amazement. The last nearly two years were hard ones with two falls, Covid and decline in health. Aunt June was ready to move on. We take comfort to know she is now at peace.