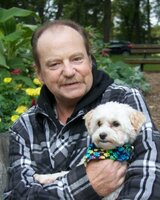 It is with great sorrow that the family announces the passing of Wayne Erroll Wright on August 30, 2021, at Riverview Health Centre at the age of sixty-five. Wayne is survived by his beloved son Christopher (Chantal) and grandpuppy Daisy who filled his life with love and laughter. Also left to mourn are Debi, devoted mate who remained by his side until his last breath; lifelong friends Greg Saunders and Ron Fehr; and extended family Barb and Garry Hawryluk. Wayne was predeceased by his brother, William ‘Bill’; his mother Charlotte and father Earl; and grandparents August and Emma. Linda Ellis’ poem “The Dash” poignantly highlights that when life is over, everything we have done will be represented by a single dash between the dates of birth and death. Life’s nature/nurture deck of cards is allocated unevenly among us, and Wayne was dealt a bruising hand, but over the course of his sixty-five years he cultivated an inspiring dash: Tinker Town’s bad boy, barbeque king, kid-chasing swimming pool shark, chess tutor, cheeky flirt, computer fixer-upper, Santa Claus, and champion debater (just ask Chris and Debi). Even as he grew weaker, he insisted on defending his title - “Come on, Deb, you gotta give me a win here.” Wayne’s legacy is one of love, commitment to personal growth, and selflessness, even as cancer tore him apart piece by piece. His Anderson Cooper giggle will forever echo in our hearts. The family would like to thank the palliative care team, especially Sean and Erwin for their compassionate care and concern. In keeping with Wayne’s wishes cremation has taken place and there will be no formal service. If anyone wishes to honour his memory, a donation may be made to The Winnipeg Humane Society or Cancer Care.