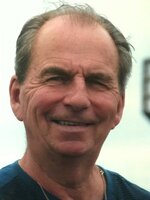 It is with great sadness we announce the passing of Roy (Butch) on September 21, 2021 at the Riverview Health Centre after a second battle with cancer. Left to cherish Roy’s memory is his beloved wife Joyce and his loving children, son Kevin and daughter Darlene (Cam) in Winnipeg; stepchildren Shannon Trask, Bordeaux, France, Kevin Trask (Tracy) and Stephen Trask (Melanie) in Winnipeg; grandchildren Harlen, Jack and Sam; step-grandchildren Chloe, Abby, Justin, Margeaux, Gavin, Blake, Asher, Rylee and Harper. He also leaves his brother Chris Wright (Bonnie); nephew Stephen Wright; and niece Heather Wright. He was predeceased by his mother Nevada Buchan and father Nelson Wright; mother-in-law, Stella Dreger; brother-in-law Dennis Dreger; and brother-in-law Craig Posner. Roy grew up in St. Vital and made frequent trips to Sandy Lake to the family’s cottage. Later he was a member of the Red Boine Boat Club, proud of his boat named “the Wright Stuff”. His career was in sales in the printing business. His first job was working at the Winnipeg Free Press tending to the horses in the stables which fuelled his love for horses. His last job was with Ernest Green Printing which was sold to Cancell. Roy enjoyed spending time with his many friends golfing and spent many years curling out of the Nicolette Curling Club and later with the St. Vital Seniors at the St. Vital Curling Club. He enjoyed his cottage at Grindstone and spent many happy times there with Joyce and the family. Roy will be interned with his father and mother in Brookside Cemetery. Cremation has taken place and a celebration of his life will be held at a later date for family and close friends. Heartfelt thanks to the staff at Riverview Health Centre for their wonderful loving care of both Roy and the family during this difficult period. In lieu of flowers, donations to Canadian Cancer Care, Manitoba would be greatly appreciated to assist other families who are suffering with this heartbreaking disease.