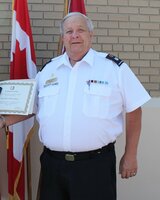 Donal Neil (Willie) Wilson passed away peacefully on Monday, October 4, 2021 at age 73. Willie was born on August 12, 1948 in Barrie Ontario. Willie is survived by his loving wife Patricia; son Darren;.granddaughters Summer and Autumn; sister Cherie Pitre of Delta, British Columbia and her three daughters; sister-in-law Cecelia (Steve) Moldwon of Selkirk, Manitoba; sister in law Sandra Wilson of Trenton, Ontario; numerous nephews and nieces; and special friends Jack and Sandra Slyford and family of Ajax, Ontario. He was predeceased by his son Trevor and brother Paul of Picton, Ontario. Willie joined the Royal Canadian School of Artillery, R.C.A. Depot, Squad 133 in Shilo, Manitoba in 1965. He was a peacekeeper in Shilo, Germany and Cypress. He was very proud to be a Veteran. Upon leaving the army, he became a car mechanic. This was always his favorite job in his heart. Willie had a strong work ethic and he worked very hard in his life to provide for his family. Willie could fix anything and enjoyed cooking, family and friends enjoyed many meals through the years. Willie was a bit of a perfectionist in all he did. We were asked to stay out of his kitchen until serving time, then I was called in to assist, always such fun! Willie enjoyed watching Nascar racing and football but especially the Blue Bombers and the Green Bay Packers. He loved fishing, camping and enjoyed his many friends. Willie loved his humour and even until shortly before he passed, you could find him teasing the staff who cared for him. I would like to sincerely thank everyone who visited Willie, offered prayers and helped me in many ways. Special thanks to the Commissionaires for their support and visits this past year, especially Vivian and Armond. The support we were given was greatly appreciated. Willie truly enjoyed working for the Commissionaires in Winnipeg and made many good friends. Cremation has taken place as per Willie’s wishes. A gathering for Willie will be held at a later date. In lieu of flowers, a donation in Willie's name may be made to Cancer Care Manitoba. I will love you forever, Willie! I will see you at the beach!