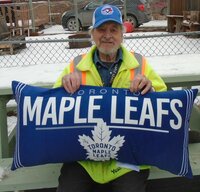 It is with deep sadness that we announce the passing of John Robert Unrau at the Misericordia Health Centre on November 17, 2021 at 86 years of age. Robert will be greatly missed by his sister Gladys (Frank) Graham; nieces and nephews Lorna Stubbs, Jimmy Unrau, Peggy, Donna, Anna, Jimmy, Gordon and Frankie; Dolly Wilson and Lynn White; Joseph, Harold and Kenneth Unrau; George Blanco, Debbie Blanco and Susan Lamoureux. Robert is predeceased by his parents John and Agnes (Nettie) Unrau; brothers William and Harry; sister Leona Blanco; sisters-in-law Goldie Stubbs and Patricia Unrau; brothers-in-law Frank Graham and Donald Blanco; and nephews James and David Blanco. Robert was born September 7, 1935 in the rural municipality of Macdonald and grew up in Sanford on the family farm. He had an intellectual disability but did not let this stop him from working hard his whole life. He was a very hard worker. Robert lived with various family members and stayed with Lorna for the last 30 years. He was super friendly to his neighbours and got to know them all quite well. Robert was a diehard Toronto Maple Leaf’s Fan. He was old enough to remember the "Original 6 NHL Hockey Teams". Try as you might to convince him that there were other or better teams to cheer for and you had a fight on your hands. That's how passionate he was about "His Leafs". Robert was a huge fan of country music. He loved artists like Wilf Carter and Hank Williams Sr., when he played his guitar his musicality often sounded like these two artists. Daily tasks included walking to the store to purchase his lotto tickets and checking the mail. He would do chores around the house such as cutting grass, gardening, shoveling snow at the house and for the neighbours. Everyone knew and appreciated him. Robert loved cats and dogs. He often told the Chaplain he missed the pussy cats (Lorna’s cats) and he was quite diligent on changing the kitty litter. Robert kept his landline, he did not know how to call out but he loved the calls he received from his sister Gladys and nieces Lynn and Dolly. Early this fall, Robert developed a persistent cough. He did not respond to antibiotics which led his condition to deteriorate. It was sadly discovered, he had lung cancer. He passed away peacefully soon after. In lieu of flowers, please consider a donation in Robert’s name to a Winnipeg Pet Rescue Shelter of your choice.