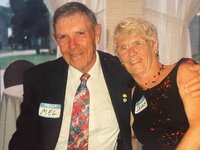 Our Dad passed away peacefully at the Grace Hospital on December 18, 2021, with his family at his side. Dad is survived by daughters Lauren (Colin) and Janice (Jon); son Drew (Susan); grandchildren Sydney, Reegan, Brandin and Robin; and many cousins, nieces, nephews and friends. Dad was predeceased by his beloved Shirley of 67 years; his mother Isabel; and his sister Shirley McGrath. Dad grew up in West End Winnipeg and attended Gordon Bell High School. He enjoyed playing football on his high school team. In fact, his team jacket still hangs in the closet! Dad made his career at General Motors, which began his love affair with GM vehicles. He worked for General Motors for 42 years, retiring in 1991. He and Mom then became snowbirds, enjoying their winters in Florida. To say that Dad was a sports fan would be an understatement! Dad played baseball, curled, and golfed, constantly staying active. He also coached many sports teams over the years - baseball, hockey and even ringette! He was especially proud of his 1964 St. Boniface Pony Baseball team, which went on to win a provincial championship! Dad served in the militia, in the Queen’s Own Cameron Highlanders. He played the drum in the pipe band. He was a proud member of the Winnipeg Massed Pipe Band, which played many venues, including Blue Bomber half time shows and most notably for Dad, the 1973 Rose Bowl Parade, where John Wayne was the grand Marshall. He talked about the band all going to Lorne Greene’s ranch for lunch! Mom and Dad lived in Windsor Park for 56 years and had many wonderful neighbours. We would like to thank Armand and Anne for going above and beyond “just being a good neighbour”. Words cannot express our gratitude! We would also like to thank the Grace Hospital ICU, ER and 3 South staff for their compassionate care. If desired, donations can be made in Dad’s memory to the Grace Hospital Foundation, 300 Booth Dr., Winnipeg, MB, R3J3M7, or [email protected] A private family interment will be held at a later date.