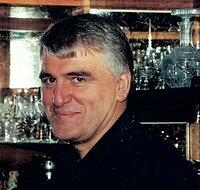 It is with profound sadness that we announce the passing of Jozef Kiska following a short illness on Sunday, January 2, 2022. Jozef was born on December 27, 1946 in Bratislava, Czechoslovakia. As a young man, he served in the military. He immigrated to Canada in 1968, not knowing English, and taking on work as a janitor with the CBC. From those humble beginnings he would go on to own his own structural steel drafting business which left its mark on the Winnipeg skyline with projects such as the revolving restaurant (Prairie 360) and Portage Place. He was incredibly active in the Slovak community, serving as the President of the local branch of the Canadian Slovak League, and as an executive member of the Canadian National Council and the Slovak World Congress. He later served as an Honorary Consul on behalf of the Slovak government. He created the Voice of Slovakia, a community television program which ran from 1986 until 1996. He was a founding member of the local International Black Ribbon Day Committee and was an active member of the Folk Arts Council of Winnipeg. He was awarded the Queen Elizabeth II Golden Jubilee Medal for his extensive public service. In his spare time, Jozef made excellent wine which he generously shared with friends. He enthusiastically and actively supported his children in their hockey and soccer playing when they were younger. He also avidly kept up with domestic and international politics and the news. His honesty and integrity in all things were second to no one. Jozef is survived by his wife of 51 years, Elizabeth, and three adult children, Larry, Chris and Roger. His love of Slovakia was so contagious that it inspired each of his children to visit his hometown, with two of them choosing to live there for a period. One of Jozef’s greatest joys were his three grandchildren, Jozef, Rohan and Kiara Bernadette. His childlike devotion to them touched everyone around him in its innocence and purity. The Kiska family would like to especially thank the Koprajda family; Tony and Eva Brasko; and Giselle Majersky for their generosity of support during these difficult times. In lieu of flowers, donations can be made to the Canadian Diabetes Association. An invitation only remembrance mass will be held on Sunday, January 9, 2022.