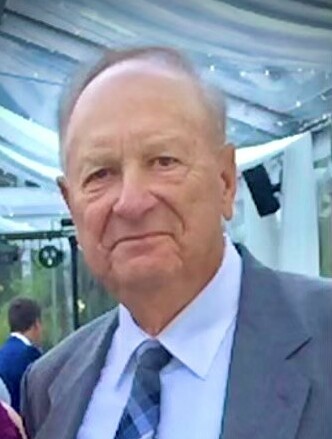 It is with profound sadness that we announce the passing of Bob Rehbein at the age of 79 at St. Boniface Hospital. Bob is survived by his loving wife of 40 years, Lynne; daughter Tanys; grand-dog, Wrigley; and his sister, Judy. He leaves behind many extended family members and friends. He was predeceased by his parents, parents-in-law and three brothers-in-law. Bob was born and raised in Elmwood. He spent his younger years playing and coaching hockey. Continuing to play hockey into his 70’s, one team in particular held a special place in his heart. Every Friday night in the winter he would be off to the rink to play with the Midnight Flyers. He loved recounting stories of old hockey times with the guys. As an adult, golf became Bob’s passion, and he was a member at Elmhurst Golf and Country Club for 50 years. Some of his favorite times were the ‘golf odysseys’ he had with his brother-in-law, Jim. They played many rounds at Elmhurst, as well as in Florida. They took the trip of a lifetime to golf and tour Scotland to celebrate Bob’s retirement. Bob’s working life began as an architectural draftsman. His attention to detail and precision were evident in every building he drew. After leaving Gaboury and Associates, Bob worked for Public Works Canada where he became a Project Manager. Before retiring, he was the Project Manager at Stony Mountain Institution. During retirement, Bob enjoyed golfing, hockey, traveling and his house. He took immense pride in his home, which he designed and built. Everything had to be perfect, and it was. He discovered cruising as a great vacation and enjoyed many holidays with a special group of friends. The biggest pride and joy of Bob’s life was his daughter, Tanys. She held the most special place in his heart. A constant presence in her life, she will miss her best friend deeply. Thank you to the numerous doctors, nurses, and other hospital staff who looked after Bob through the years. A special thank you to his family doctor, Dr. Karen Braun, where he always felt like more of a friend than patient. We look forward to sharing Bob-ism’s and stories at Bob’s celebration of life, which will be held at a later date. If friends so desire, a donation can be made in Bob’s name to the St. Boniface Hospital Foundation. “He’ll always be remembered as a man, both strong and good. Who gave his best for others, and did the best he could. He’ll always be remembered for all the joy he brought. As a man who made a difference, and a man who meant a lot.”