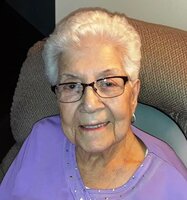 On January 19, 2022 Olympia Sarides, mother, grandmother, great-grandmother, aunt and great friend passed away in peaceful dignity. She was born on January 24, 1927 in Alexandria, Egypt to Basil and Chrisanthy Petrides. Later the family moved to Jordan and that is there where she met her late husband Athansios “Tony” Sarides. They married on October 15, 1945. Tony and Olympia then moved and lived in Jerusalem, Palestine. In 1953 they immigrated to Sao Paulo, Brazil and later in November 1957 they immigrated to Canada and set up home in Winnipeg where Olympia worked and lived until passing into the spiritual phase of her life. Olympia was proud of obtaining her Canadian citizenship with Tony in 1966. As well as being a fulltime housewife, Olympia was a short order cook at the A&W franchise on Ellice Avenue where she worked for over 30 years until she retired on her 65th birthday. Olympia had a real passion and zest for life and a love for people which is reflected in the many friends and acquaintances that she made through her long and interesting life. She loved family gatherings and enjoyed the company of the several pets that she cherished and spoiled. She had a love for reading, doing puzzles, playing Tetris and watching her soap operas and Hudson and Rex. Olympia also loved knitting and crocheting especially with her daughter Kandia when they attended the Helping Hands Knitting Group based at the Ness Baptist Church, which donated all their handicraft work to charitable causes. When she could no longer attend the group she and Kandia participated in the knitting circle at Glendale Court where she lived with Kandia and son-in-law David and where she made many new friends. Olympia was predeceased by her parents Basil and Chrisanthy; her beloved husband Tony in 1979; brother Peter; sister Anastasia; brother Michael; sister-in-law Clio Sardou; and brother-in-law Sotiris Chris Sarides. She is survived by her daughter Grace (Jan); daughter Christine; daughter Kandia (David); son Philip; grandchildren Marcus (Patty), David (Hitomi), Nicole (Jelmer); great grandchildren Sora and Joris; and many nieces and nephews and other extended family members located in Canada, the United States and several other countries. She will be missed by her family and the families of her many friends who have lovely stories of times spent with her. This especially applies to the Phillips, Ritchie and Solon families who were important parts of her life and also the many families whose children she would often look after. The family is extremely grateful to the WHRA home care staff that cared for her with kindness and respect during her later years. It has been said that life is like a train ride and there are many stops along the way. People get on and off. Some occasions are happy and some are sad, but we know that if Olympia was still with us today she would thank all of you for joining her on her personal train ride and being part of the rich tapestry of her life. Due to the ongoing pandemic there will be no formal memorial service. The family will hold a small gathering to celebrate her long life at a later date. Due to her love of animals, donations in her memory, if so wished, can be sent to the Winnipeg Humane Society.