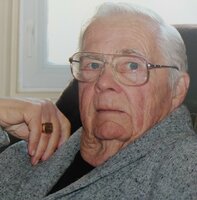 It is with great sorrow that we announce the passing of Halley Robert (Bob) Jackson on January 31, 2022. Bob leaves to mourn his passing, the love of his life, Valerie Jackson; his daughters Danna, Laura (Marcel), Linda, Jeannette; and his son David. He also leaves his grandchildren Michael Jackson, Adam (Karlie) Bumbolo, Nathan Bumbolo, Valerie Jackson (Jeff Behun), Josh Harrison; and great grandchildren Cobin and Hayden Jackson, Lucy and Vinny Bumbolo. Bob was predeceased by his parents, David Halley and Edith Jackson; sister Donna Mae Ward; nephew Robert Ward; and grandson Taylor Jackson. Bob was born in Winnipeg on January 14, 1937. He went to General Wolfe and Daniel McIntyre schools and later continued to the University of Winnipeg to obtain his CA degree. He was immensely proud of his career and developed many long-lasting friendships. His duty, as he would say, to his career lasted until his official retirement at the age of 80. He was a man that always entered a room with a smile and was able to lift the spirits of those around him; this was one of his many charms. Joy was important to him. With his comic, playful mannerisms, he never left his ‘audience’ without a good chuckle, if not in complete belly laughter and always had a joke to share. He was a lover of music from Opera to Rock. He was an amazing baritone and as a young man sang in many choirs and as a soloist at schools, music festivals, and church. Between his amazing voice, comic style, graceful dancing, and handsome looks he in so many ways missed his calling on stage versus being in business. However, all those qualities provided him the charisma, poise, and social skills to excel in the business world and he was loved by many. Regardless of his tireless work ethic he was a family-oriented person, a wonderful husband and terrific father. He was a gentle, loving, happy soul that will be so missed but never forgotten. A celebration of his life will take place at the Holiday Inn Airport West, 2520 Portage Ave on Monday, February 7, 2022 at 1:00 pm. It will be an open mic; all are welcome to share their stories. Covid Vaccination proof is required.