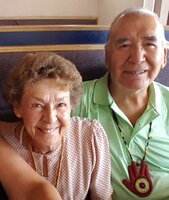 With great sadness, we announce that after a brief illness, Suzanne Winbergh passed away at the age of 77 years at Riverview Health Centre in Winnipeg, Manitoba, on January 17th, 2022. Left to cherish Suzanne's memory is her beloved partner Calvin Pompana of 17 years. Suzanne will also be lovingly remembered by her son, Nick (Melissa) of Victoria, British Colombia; her daughter, Amanda (Michael) of Calgary, Alberta; and her three grandchildren, Anderson, Olivia, and Somer. Also mourning Suzanne's passing is Simone, her sister in Sweden. As well as Calvin's daughters Leila, Daphne, Lucy (Benito); his nieces Robin and Yvonne; his granddaughter Anissa; and his three great-grandsons. Sadly, Suzanne also leaves behind her sweet Lawrence that she loved so dearly. Suzanne was predeceased by her parents, Lou and Lars Ola Winbergh and her loving dog and cat, Phoebe and Pelle. Suzanne was born on May 17th, 1944, in Stockholm, Sweden. Suzanne grew up in a happy, loving home with her mom, dad, and sister, who was only 14 months younger than her. Suzanne did well in school, had lots of friends, and giggled with a beautiful smile while playing with her close friends. Suzanne enjoyed ski trips with her friends, going to the lake outside Talum, Sweden, where she boated, fished, and even learned to water ski. In addition, Suzanne enjoyed taking part in school plays and in Swedish traditions called Santa Lucia, Midsummer, and crayfish parties. Suzanne's first job and one that she has very fond memories of was being a nanny in Scotland during her summer vacations. Suzanne graduated high school in 1962 and was very excited to move on to the next stage in her life. So, she moved away from home and into her apartment and became a ground hostess with Scandinavian Airlines System in Stockholm right after graduation. She then went on to work for Air France from 1963 to 1967! This is where Suzanne started to gain a fantastic sense of style and her love for beautiful clothes and shoes. In 1970, Suzanne moved to The Pas, Manitoba, with her husband Sandy Banks and her young son, Nicholas, born in Scotland. The first year of living in The Pas, Suzanne welcomed her second child, Amanda. Suzanne made many friends in The Pas and was surrounded by a beautiful community of people to support her when the kids were little, and she was feeling lonely with no family in Canada. Suzanne enjoyed spending time at Clear Water Lake while Sandy built the family's cabin. In the winter, she enjoyed snowmobile rides across the lake, bundled up with the kids in the sled pulled behind the Skidoo. In 1978, Suzanne moved to Winnipeg, where she resided for the rest of her life. Suzanne settled into a cute duplex on Rathgar Avenue, a block away from Lord Roberts School. She loved living on Rathgar. She enjoyed taking the bus, walking everywhere, and visiting her neighbours from her home. Suzanne also loved when her kids and friends visited and spent time with her on Rather. There were sometimes, the kids even lived with her. Amanda lived with her while Nick was in boarding school in Winnipeg and would come home on the weekends. Suzanne would take the kids to movies, shopping, swimming and lots of Blue Bomber games. For many years Suzanne worked at various jobs in the home care service industry. Suzanne was a very caring person, and her passion in life was her volunteering work. She was also generous. She was sure to be giving money away if she came into any! Throughout her time in Winnipeg, as most people know her, Sue met and became good friends with so many people, and she would remember everyone. As time moved on, Suzanne moved into Vasalund, located on Roblin Avenue, with other individuals of a similar age and Swedish descent. This was great because she enjoyed speaking Swedish, and she had no one to talk Swedish with until then! In addition, Suzanne enjoyed visiting her kids while they were away at university and visiting her family back home in Sweden. Eventually, Suzanne became a Mor Mor and a Far Mor. And not long after, she met the absolute love of her life, Calvin. Calvin will tell the story of how they met. It wasn't long before they became good friends and then started dating. And for the 18 years Calvin and Sue travelled, explored laughed, loved and cared for each other deeply in a magical way. We want to thank several individuals that help support Suzanne in her last couple of weeks before passing away. First, we would like to thank the emergency team at Grace Hospital. We want to thank Crystal of the Grace Hospital Social Work support team for coming to visit us while in emergency and helping us navigate what to do next for both Sue and Calvin. We would like to thank the excellent palliative care team at Riverview that sent the on-call doctor to visit our mom at her home and let us know what we should do, and was such a great help getting mom a bed as soon as possible. We want to thank the nurses and the doctors at Riverview that helped our mom feel so comfortable and cared for during her last few days. Lastly, we want to thank Suzanne’s long time Doctor Dr. Leung Shing who phoned everyday to help walk us through Mom’s transition to end of life.