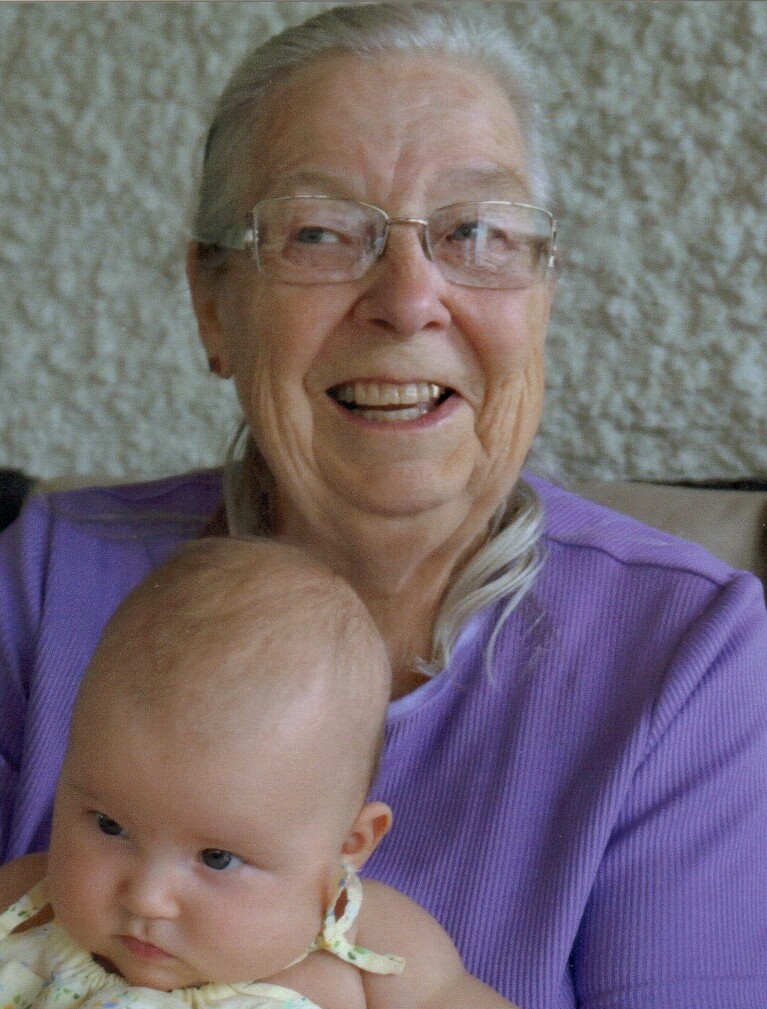 Kareen Evelyn Hay (ne: Brown) passed away in the early hours of December 23rd, 2021 after a short stay at the hospital in Beausejour Manitoba. She was born on July 22nd, 1931 in Stonewall Manitoba to Philip and Margaret Brown. Kareen was predeceased by her parents, her husband Mike, brothers Walter (Doc) and Alister and her daughter Deborah (Hay) Grimes and son in law Bruce Grimes. She is survived by her sons Philip (Deanna), David (Lisa) and Darren (Zuleika), her grandchildren Erin Mckay (Russel), Michael, Christopher, Julie Picard (Kemuel), Brett, Brandon, Brock and Nileika as well as her great grandchildren William and Stella Mckay. Kareen married George Michael Hay on January 16th 1953. Mikes job with MTS meant a lot of moving around in the beginning. They were married in Winnipeg and shortly after moved to Portage La Prairie, then to Montreal and back to Winnipeg. From there they went to Whitemouth Manitoba where they stayed for seven years and then it was back to Winnipeg in 1966 for the rest of their marriage. Kareen loved to curl and joined the Charleswood Curling Club where she and Mike curled for many years. It’s also where she Skipped her team to an 8-ender which was one of her proudest moments. Kareen was very active in her community with Jobs Daughters and driving cancer patients to their appointments. She was also very well known by all the kids in the neighborhood for her weekly homemade cinnamon buns! After Mike passed away in August of 1979 Kareen remarried and moved with her sons David and Darren to Ardmore Alberta. She purchased the Ardmore Hotel and made many friends during her time there. She sold the hotel in 2001 and moved to Nova Scotia. From here Kareen went to the Dominican Republic with her son Darren and his family. After a year she moved back to Canada to live with her daughter Deb in Victoria B.C. where she made more good friends who still reminisce about her baking! Sadly Deb passed away in December 2020 so Kareen moved to Anola Manitoba to live with her son Phil and his family. Kareen took great pleasure in her last days there and especially enjoyed basking in the summer sun and watching her great grandchildren play. Family was Kareen’s pride and joy and she seldom missed an occasion to send cards, make a phone call just to say hi and make you laugh, or come to visit when she could which was never often enough. Kareen touched a lot of lives in her 90 years as she moved through the stages of her journey, always keeping a sense of humor along the way. After suffering a heart attack in 2017 and being unresponsive for 4 minutes she was asked “what did you see?” and without delay responded “not a damn thing so I came back!”. Kareen was many things to many people, a mother, wife, friend, business woman, baker, councilor, philosopher, and a comedian. She will be remembered by family and friends for never lacking a quick witted response, her delicious baking, her love, her humor and her altruistic spirit. The family would like to thank everyone for their messages of condolence and for all of the great memories shared. We would also like to thank the home care staff who did such a fantastic job and all of the doctors and nurses at the Beausejour Hospital for their dedicated care and support.