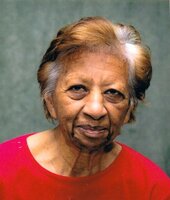 It is with profound sadness that we announce the peaceful passing of our dear mother Dorothy Grace Balkaran (nee Prayag) of Winnipeg on Sunday, March 20, 2022 at the age of 95. She is survived by her loving sons Adrian (Cheryl) and Anders (Janet); and numerous other family. She was predeceased by her husband Andy; and her three brothers Leo, Lloyd and Horace. Dorothy Grace Prayag was born September 7, 1926 in San Fernando, Trinidad. She and Andy Balkaran were friends since elementary school, and eventually became sweethearts years later. She was educated at, and eventually worked at, the Naparima Girls High School. She and Andy married in 1952. Two years later, Andy left Trinidad for Winnipeg in search of a better life for them both. Andy worked and attended college, and Dorothy eventually joined him in Winnipeg in 1956, the same year Andy entered Law School. Andy graduated from the Manitoba Law School in 1960 as the Gold Medal winner at the top of his class. None of Andy’s successes in school, or his distinguished career would have been possible without Mom by his side; working and supporting him in the early years, running the household, and raising their boys. All she ever wanted in life was to be a Mother. She was a great Mom, and her sons were her greatest joy. The family moved to Regina in 1966 where Andy took a prestigious job with the Government of Saskatchewan. While in Regina, Adrian became ill, and Mom dropped everything to remain at his side in hospital. Mom and Dad eventually moved the family back to Winnipeg, settling in Transcona where they both resided until their deaths. Mom was a woman of many talents: cooking, sewing, crafting, ceramics, painting, gardening, and heavy work such as shovelling and home repair - just to name a few. She loved to garden. Her plants and flowers in the sunroom, her vegetable garden, and her rose bushes were a source of great pride. She was a great hockey Mom too, walking in the freezing cold to Oxford Heights or East End Arena to attend our games and help us lace up our skates! Mom loved a good party: rec-room get-togethers, barbeques, Mom’s food, drinks and music - she loved all music but especially church hymns, calypso, or anything with a rhythm. Mom and Dad’s home was always open to friends, family, and neighbours. And their home was always filled with lots of food! Andy may have taken credit for the meals, but it was Dorothy’s culinary talents that were on display for all to enjoy, something she passed on to Anders. There were also many late nights where she would get out of bed to whip up big pots of curry chicken or cook a ham for Adrian, Anders and their friends who showed up at the house late and hungry. Mom and Dad also shared their home with a number of Trinidad “imports”, taking in family and friends who immigrated to Winnipeg, cooking and cleaning for them while they pursued College or University. Just as Mom facilitated Dad’s success, she was instrumental in supporting others’ successes. Mom and Dad enjoyed travels across Canada for law conferences and family vacations. In later years they enjoyed their annual months-long trips back to Trinidad to escape the cold Winnipeg winters. Dorothy was also an active member of the Transcona Memorial United Church for many years. After Andy’s death in 2000, Dorothy became more and more dependent on her sons, friends and neighbours in order to stay in the family home. Mom still would cook up a feast daily and continued to shovel snow into her eighties. Adrian was there most days supporting her. As a result of progressing dementia, Dorothy eventually moved into the Park Manor Personal Care Home in Transcona five years ago. In her declining years, one of the strong memories Mom held onto and spoke about was the “dormitory” and looking after the girls at the school. Mom learned and passed on many of her skills at Naparima. Adrian’s (almost) daily visits continued right to the end, and the family is grateful that he was by her side, holding her hand when she passed, as gentle calypso music played. As mentioned before, with her passion for music, Mom was singing up until the day before she passed. The family wish to thank all the caring staff at Park Manor in Transcona. Their compassionate care for Mom and their extraordinary efforts, especially during the last 2 years of Covid, were and are very much appreciated. Cremation has taken place. Mom’s wishes were for her ashes to be cast “into the sea.” A private gathering of family and friends will occur at a later date. Family and friends are invited to leave condolences and share memories by visiting Dorothy’s memorial page at Alternacremation.ca. In lieu of flowers, donations may be made in Dorothy’s memory to the Alzheimer Society of Manitoba, 120 Donald St., Winnipeg, MB., or, to Park Manor Personal Care Home Inc., 301 Redonda Street, Winnipeg MB, R2C 1L7.