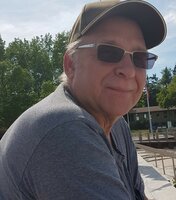 Bruce left his earthly family on March 21st to join his Heavenly family after a courageous 2-year battle with cancer. Left to cherish his memory are his devoted wife, Jacquelyn (nee Childe); son Brandon Ward; daughter Jennifer Fletcher (Laney); brother Reid (Nadia); grandchildren Katelyn (Nic), Bryce, Payton, Courtney, Nash and Danica; and nieces and nephews Lisa, Dave, Lesley, Bryan and Amanda. He was predeceased by his father, mother, father-in-law and niece. Many thanks to all that helped so much during these past two years, his brother-in-law Brad Childe (Patricia); sister-in-law Kathy (Bill) Wardekker, Jennifer (Laney), and especially Katelyn and Nic. Also, many thanks to Palliative Care and the wonderful Health Care Aides with Home Care for their help in ensuring his wishes to remain at home were met. As per his wishes, cremation has taken place and no service will be held. Donations in his name can be made to an animal rescue of one’s choice.