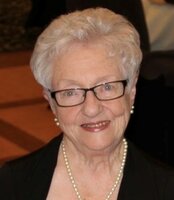 MEMORIAL SERVICE Saint Marks Anglican Church 19 St Marks Place Winnipeg, MB R2M 0S3 2:00 pm on Sunday, July 17, 2022 Judy Brown (nee Smallacombe) passed away peacefully July 9, 2022 at Golden Links Lodge, in Winnipeg, MB at the age of 83. She was born on May 25, 1939 in Winnipeg, MB, the only child of George and Alice Smallacombe. She is survived by John, her husband of 53 years; her two daughters Pamela Holtz (David) and Andrea Pimlott; and four grandchildren DJ and Erika Holtz and Aidan and Colin Pimlott. She had many friends and cousins and will be missed especially by her long time friend, Lee Chalmers, of Pickering, ON. Judy lived her entire life in Winnipeg, attending Luxton School, St. Mary’s Academy and St. Paul’s College. At University, she joined the Zeta Tau Alpha sorority and remained active with the ZTA alumnae until recently. After university, she worked in the actuarial department of Great West Life, and later worked for Statistics Canada until retirement. Judy met John at the Winnipeg Canoe Club, and began a relationship filled with family, many friends, and social activities. Bridge club, travel, sports, summers at Perch Bay Resort and the social life at 65 Paget filled their time, especially in retirement. A lifelong volunteer, Judy dedicated her time to many causes. She actively fundraised for many charities, delivered Meals on Wheels, and volunteered in support of several provincial and federal political campaigns. She was a long-time member of St. Mark’s Anglican Church and served on the vestry, altar guild, as the treasurer and sang in the choir. She supported every one of her daughters’ pursuits by driving, chaperoning, making costumes, coaching, hosting parties and being a constant presence in the stands and audience for every game and concert. Judy was an athlete and avid sports fan. As a child and teen, she figure skated with the Assiniboine Figure Skating Club and was a Winnipeg Blue Bombers Bomberette. She participated in many sports throughout her life including basketball, volleyball, curling, golf, badminton, and bowling. At various times, she was a season ticket holder for the Winnipeg Blue Bombers, the Winnipeg Jets (WHA and 1.0) and the Winnipeg Goldeyes. She was her kids’ and grandkids’ number one fan, traveling the city, province and country to cheer them on. In 2022, Judy was honoured by being inducted into the Manitoba Curling Hall of Fame in the Builder category, capping off decades of involvement in the sport. She was President of the Manitoba Ladies Curling Association in 1990-91 and was later granted an Honourary Life Membership in the MLCA. Judy was a multi-term president of both the Grain Exchange and Wildewood Ladies and served on several provincial boards and committees. Notably during her term as MLCA president she also served on the Board of the 1991 Winnipeg World Championship Committee. As a curler she remained active until her late 70s and competed in the 1990 Senior Women’s and 2001 Diamond Ladies Provincial Championships. A Celebration of Life will be held at St. Mark’s Anglican Church, 19 St. Mark’s Place, Winnipeg, on Sunday, July 17 at 2 pm. A reception will follow in the church hall. A private family interment will be held later at Chapel Lawn Cemetery. Many thanks to staff at Golden Links Lodge, Realcare, The Waverley and Rosewood retirement homes, and Deer Lodge Prime for their care. In lieu of flowers, donations may be made to the Alzheimer’s Society of Manitoba.