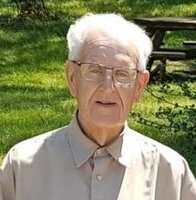 Alfred Miederhoff died peacefully on July 15, 2022, at Beacon Hill Lodge in Winnipeg on July 15, 2022 at the age of 88 years. After immigrating from Germany at the age of 23, Alfred made Winnipeg his home in 1957. Two years later, he married Martha Jabs who passed away on October 11th, 2013. Alfred was a skilled and respected carpenter. In 1988 after 25 years, he retired from Kraft Construction. Alfred was grateful for Martha, his wife of 54 years and for his life here in Canada. He was as a quiet man who loved to learn. He frequented his local library where he sought out books of history, philosophy and geography. He is survived by nieces Rita Bergen and Diana Fast of Winnipeg; and his sisters and brothers Gisela, Leonora, Friedhelm, Walter, Heribert of Germany. Thank you to the compassionate caregivers at Beacon Hill Lodge and to his long-time faithful neighbors and friends Ada and Henry Wiebe. Thank you to nephew Stefan Schuermann of Germany who reached out to Alfred this past year with photos and messages from his family. He enjoyed receiving them all. A private service honoring Alfred will be held at a later date.