The History Of Urns 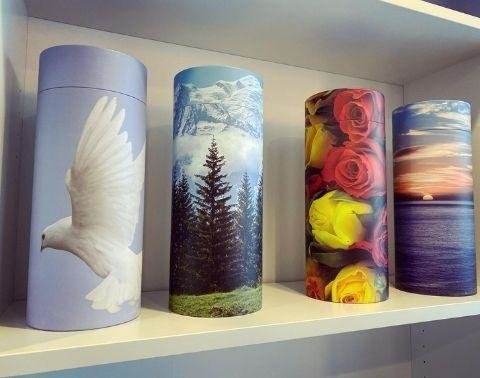 We live, and then we die; it’s a tradition as old as time itself. And over the years, the ways different cultures and religions have dealt with death has changed. From burial services to cremations, humans have developed several types of ways to commemorate loved ones who have passed on.

The simplest definition of a cremation urn is a container that cremated remains are stored in. They’re made from a wide range of materials; some are simple and dignified, while others are elaborate and decorative.

These days, many individuals choose to be cremated and have their ashes stored in an urn. But how did this custom come to be? We’re going to explore the history of urns, starting with what we know about their antiquity and what they look like today:

It’s hard to imagine what life was like during the Stone Age, but evidence suggests that in parts of Europe, people were practicing cremation during this time. Hindus in India and other countries have been performing cremation rituals for over 4000 years.

The practice of cremation became commonplace in Ancient Greece by 1000 B.C. It was recognized as a hygienic way to handle remains, especially during plagues and wars.

Cremation became an integral part of burial practices. During memorial services, pottery urns were used to store remains and show respect for the deceased. These containers were typically painted and placed in an underground tomb (which was called a columbarium). Greek urns were referred to as lekythos vases.

As time passed, more cultures embraced cremation as a way to honour those who passed on. It became more popular in the United States when Dr. Francis Julius LeMoyne opened the first North American crematorium in 1876, in Pennsylvania.

By 1913, dozens of crematoriums had opened up across North America. Thousands of cremations were taking place each year. This is also around the time that styles of urns became more artistic and elaborate. Originally formed from clay, urns today are made from materials like glass, stone, wood, metal, and marble.

In recent years, cremation rates in Canada have steadily increased. According to recent data, the cremation rate was 47.7% in 2000, but this figure has risen to 73.1% in 2020.

Some religions disallow cremation, but in general, attitudes worldwide have become more and more accepting. This may be the result of environmental concerns about burials, which often use embalming chemicals to preserve the body, and always require large amounts of land use.

People today choose to be cremated for all sorts of reasons. It’s a more affordable option than burials, with a lesser impact on the environment. Keeping a loved one’s remains in an urn allows you to remember them in a personal and unique way. Some people even use urns for cremated pets.

For millennia, it has been important for people to show respect and honour those who have passed on. Knowing that cremation has been around for thousands of years makes today’s cremation services a traditional way to plan your final arrangements. And one that is less expensive than burial options.

Timing: What Is The Best Day Of The Week To Hold A Funeral?

As you’re grieving for a lost loved one, a new task falls on your plate: Planning a funeral. Holding a funeral service allows loved ones to gather, support each other, and collectively mourn the lo...

Do I Need An Urn If I Am Scattering The Ashes?

The death of a loved one is incredibly overwhelming.  In addition to the obvious pain and grief that naturally come with loss, there are also many hidden obligations.     Plan...

When a loved one passes away, it is common to want to honour them with a memorial or a funeral service. Many people are now looking at the traditional funeral a bit differently, though. They want t...

Is A Casket Needed For Cremation?

When a loved one passes away, many people feel overwhelmed at all of the arrangements they need to make. Many people choose cremation to honour a friend or family member with the intention of eithe...

What Is The Difference Between A Death Notice & An Obituary?

Two of the most common methods of notifying the public of someone’s passing are a death notice and an obituary. Both are important announcements that can honour your loved ones and let others know ...

Why You Should Preplan Your Funeral

They say that fortune favours the prepared, and it’s easy enough to see why that might be true. When you’re organized, when you have all of your ducks in a row, things fall into place more easily, ...

Cremation Versus Burial – How To Decide Which

Pre-planning your funeral or attempting to plan the services for a loved one who has passed can feel overwhelming. There are a tremendous number of decisions that must be made, but perhaps the most...

WINNIPEG, Canada – In this day and age, many women in business feel like they’re racing the clock to start a family, while simultaneously trying to build their careers. But maternity leave can imp...